Short Answer: This is a typo in our documentation. You should run make check_lab0, not make check.
Long Answer: The make target, check, runs the entire sponge test suite. The full test suite requires a shell script, tun.sh, which you won't get until a later lab. The make target check_lab0 will just test lab0. You should be able to run it with the lab0 starter code (although it will return an error until you've completed the lab!).

To use a late day, please email the staff list (cs144-aut1920-staff@lists.stanford.edu) by the lab deadline, letting us know if you are using late days. With weekly labs, the CAs want to be able to get feedback to you quickly. As such, we will start grading as soon as the deadline passes, and want to avoid redundantly grading submissions that weren't intended to be final.

Here are some links to resources to learn Git.

Brief summary: Git commits store a snapshot of the current state of your code. For instance, say you break a feature that you know used to work, but aren't sure which code caused it to break. If you made a commit after getting that feature working, you can checkout that commit to see what things looked like in the good old days when it worked. So, make a commit every time you get something working! To make a commit:
First, git add the files you've changed - you must add before every commit. e.g. git add ../libsponge/byte_stream.*
Then, commit with a message describing the state of the code. e.g. git commit -m "All tests pass except many_writes times out."
You can see which files you modified by running git status. To really understand the state of a Git repository, the command-line tig tool, or the graphical gitk tool, can be very helpful.
A handy shortcut to commit all modified files is git commit -am "[message]".
Don't git push - when you're ready to submit, you'll use git bundle instead to package your commits.

Sanity check: If you want to verify that you have submitted exactly the files you intended to, you may find the following useful.
First, once you've committed, run git status. You should see a message saying nothing to commit, working tree clean. If you have uncommitted changes, you'll see this instead: Changes not staged for commit:.
Second, after you've copied your git bundle to rice, and logged into rice:

gdb is a great tool for debugging the labs! Check out the CS107 guide if you need a refresher.
To use gdb to debug a test:

We don't have any preference on the behavior if the caller tries to peek or pop more than is available in the stream, as long as you behave reasonably and don't crash in that situation. If you want to peek/pop the maximum available, that is fine with us. If you want to throw an exception (either for an overlength peek or an overlength pop), that is also fine with us.

Those whose index is within capacity indices of the first unread byte in the re-assembled stream. Pictorally: 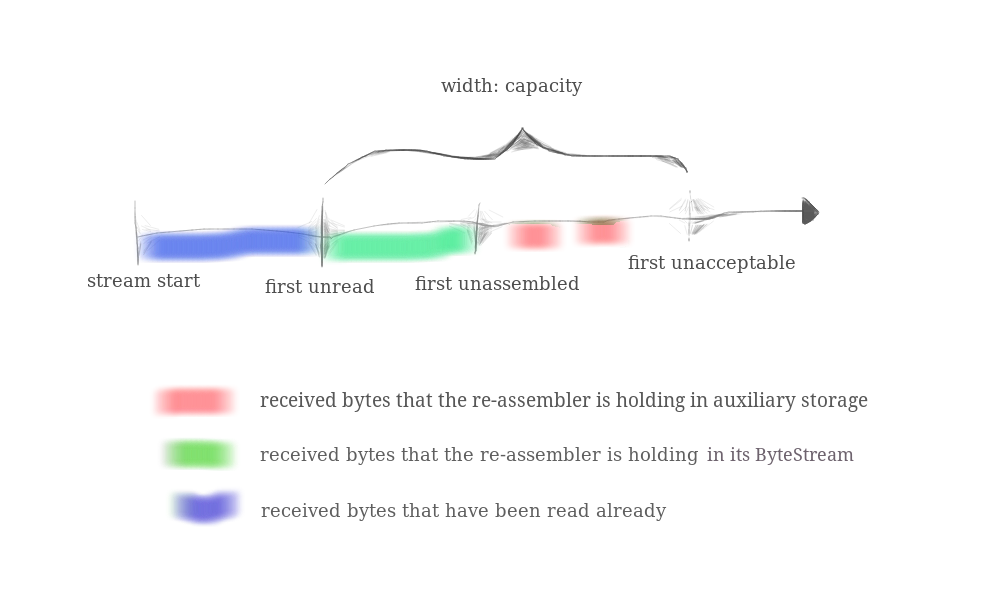 Yes, these kinds of functions (those that explicitly convert between numeric types) present exactly the kind of situation in which static_cast is appropriate. Note also that you don't need to use static_cast if you don't want to—you can explicitly construct a WrappingInt32 with syntax like WrappingInt32{x}. Good question—please see our Piazza note where we clarify this. The short answer is that we've deleted a test in the lab2 starter code in order to make both answers to this question (yes and no) acceptable.